Before moving to New Zealand, my exposure to rugby was pretty limited. It consisted of watching the All Blacks perform a haka on Youtube and going to a few college parties at the Rugby house. It’s safe to assume I’d never been to a live rugby game before.

Determined to continue my full immersion into kiwi culture, last weekend I went to my first rugby game at AMI stadium in Christchurch. It was a provincial match between Canterbury and Auckland, who are ranked one and two in the Mitre 10 Cup competition, respectively.

The atmosphere was electric, the weather was perfect, and I had no idea what was happening.

If you’re like me and didn’t know anything about rugby before moving to New Zealand, here are a few things to know that will help you follow along from the stands.

Some Basic Rules and Terminology

Rugby is a full-contact sport played on a grass field, also known as a pitch. A game is referred to as a test if you’re playing an international opponent and as a match when competing domestically. Games are played in two 40-minute halves.

To advance up the field, players have to pass the ball sideways or backward. When restarting the game after a stoppage, players arrange themselves in the scrum. This involves players packing closely together with their heads down and attempting to gain possession of the ball.

A try is the main way to score points during a rugby game and is to rugby as a touchdown is to American football. It can be scored by grounding the ball on the try-line or in the in-goal area between it and the dead ball line. 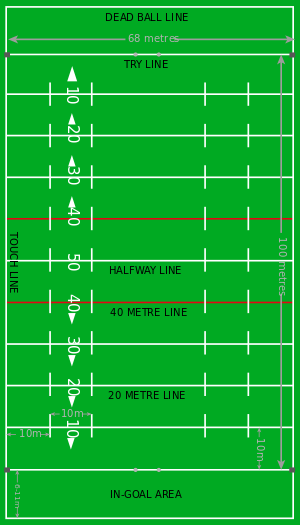 Once a try has been scored, the team can go for a conversion worth two points, similar to American football (also known as gridiron here in NZ). A conversion is scored when the ball travels above the crossbar and between the posts of the goal which is situated in the middle of the try-line.

When someone refers to rugby in New Zealand, they mean Rugby Union. In Union, 15 players are on the field at any given time, compared to the 13 players in League. The main difference between these two leagues is what happens after a player is tackled.

In Union, after a tackle, the ball is contested meaning that whoever was holding the ball has to let it go and the two teams fight it out for the ball in the scrum. In League, a tackle is uncontested so the opponent has to let go of the player and back up 10 meters, giving them space to continue playing. Scoring is also different. In rugby union, a try is worth five points but in rugby league, it’s worth four.

There are other minor differences but these are the need to knows.

The most famous rugby team in New Zealand is the All Blacks. They’re the national team that competes around the world and represents NZ at the Rugby World Cup.

In Canterbury, local residents also cheer for the Canterbury Crusaders and Canterbury Rugby. During the Super Rugby Competition, which runs from February to August, the Canterbury Crusaders compete against 14 other teams from Argentina, Australia, Japan, New Zealand, and South Africa for the championship. Come early Spring, provincial rugby has its turn in the sun and Canterbury Rugby competes in the Mitre 10 Cup against other domestic teams from across the country. Just google the Ranfurly Cup if you’re interested in a deep dive into the long history of NZ provincial rugby.

This is far from an extensive list but hopefully, it will help you know all the right moments to boo the opposition and cheer for your home team.

If it all starts to get too confusing (which it can and will) just crack a cider or beer and enjoy the fresh air. She’ll be right.